This is the complete game of Robostar. It contains about two hours of gameplay and a large number of endings: you will not see all the dialogue in one playthrough.

Robostar is free and always will be, so shares and feedback are the most valuable currency to us right now. It would mean a lot if you left us comments letting us know what you enjoyed most and least, or if you especially enjoyed it, shared it with your friends.

I'm loving the game so far, but I have to mention that the static noise for the hacker boss fight does not respond to the sound effect slider. The game is pretty loud by default, so I turned the volume down... and then I nearly had a heart attack from the sudden loud noise.

I also kinda wish that augments would tell you how much CPU they cost to install - if they do, I missed it. Other than that, I like it!

Hey, I just saw this (and spotted that you'd streamed it) -- thank you! It really means a lot to me to see other people enjoying the thing I made!

Apologies for the near-heart attack from the static! I added in sound effect sliders really late into development and apparently didn't catch everything that might have been affected by them.

Re the stuff you mentioned in the stream: you're right in that the main thing which affects the ending is whether or not you kill Emma and whether or not you open the station's comms. Once you've helped Emma wire the station, she'll carry out her plan to blow it and escape to Mars regardless of whether you escape with Paris or kill him.

And you were absolutely right: it is possible to get an ending in which Harold Phaiston gets what's coming to him -- although it takes a pretty circuitous route which I'd prefer not to entirely spoiler in the comments here :) The first step is to turn on Emma immediately after you've helped her wire the core to detonate; she'll drop what is arguably the most powerful secondary weapon in the game, even if not everybody recognises it as such.

(Oh, also, you can skip the ending credits / ending by hitting escape!)

Thank you for the extra information! I'm planning on streaming it again at some point - it feels really good to play.

Oh, just so people aren't confused/want to see some gameplay:

Just finished it in a bit over 2h. Gameplay was fun, although I would have wished for  actual controller support. There is a good variety of weapons and augments. The spacing between saves is also pretty good. The early game was a bit too easy (I played on the mid-difficulty level). I only died a few times at the end (after defeating the boss of the red zone).

I couldn't read what the first boss was saying, because it was behind his health bar. The text at the bottom of the screen (new Items etc.) is a bit blurry, should maybe be scaled with nearest neighbor. In general there were some dialogs that were skippable by pressing one of the fire buttons and some where this was not possible. Also, I got stuck in a wall twice*.

SFX were good, music was pretty nice too, except the fighting music of the dark blue zone. That one I LOVED! Animations good, enemy design also nice and varied, interesting color palette. The boss fight where you get hacked was also really great, although the screen indicating you were hacked (tv static) was not as nice as the rest of the graphics.

Thank you, that's really useful feedback! I would love to see the libraries you mentioned, I was never quite happy with the compromise on the particle effects.

First I just want to say that I LOVE the aesthetic you've got going on here. Big fan of the low res, limited palette, retro vibe, although I do feel like this could be improved in some areas.
Most notably, the particle effects for enemy deaths don't conform to the same strict colour palette that's present for the other sprites, nor do they keep to the same rigid movement style that enemies do.  There are some tools available for Unity that come help overcome these issues, I can send you a link to them if that's something you're interested in.

Some other QoL features would also go a long way such as the inclusion of a pause mode, controller support and firing with the directional keys, which was my first instinct considering this is a twin-stick shooter.

Also a huge fan of the enemy spawners and the animation of each new enemy being built piece by piece, an excellent little feature. 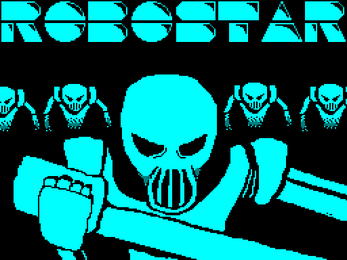